What is The Main Difference Between Cap And Hat 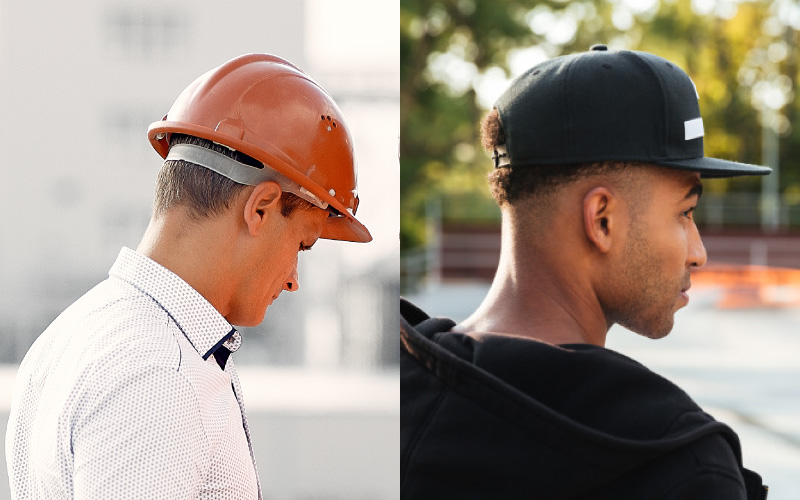 Even for once, you may have wondered what kind of a hat is that, or is that a different type of cap. If you still have that question unanswered, you have come to the right place. Throughout your reading, you will find out all the necessary information regarding hats and caps.

Hats and caps are two sorts of headgears that are worn throughout the world for their multiple functions. All these headgears are used as a fashion statement or to get shielded from pollution and heat. A lot of individuals frequently found it hard to distinguish between these two kinds of headgears. Although, the brim may easily distinguish them along with the peak. The hat would be a crown-shaped headgear with a brim; on the flip side, a cap is a soft, flat hat with no brim and usually with a peak. With those definitions, one thing is apparent that cap itself is among those kinds of hats. We will further discuss the difference between cap and hat.

What is a Cap?

Caps are often seen to be used as accessories for casual wear because of headgear. Though men frequently wear them, you will find a majority of women who also find relaxation in wearing caps. Caps can also be used for various other purposes besides as an accessory. They are frequently employed for providing shade or for supplying warmth in the winter season. Caps may also be seen to be part of a uniform and are often used by sportspersons.

Depending on the purpose of the cap, they are of many kinds. The gap between each of these types is also marked by the kind of fabric used. The cloth used for making caps that offer shade differs from the others. The preference of caps for sportspersons is lightweight and does not interrupt one from performing their activity.

Caps come in a variety of sizes and shapes. Given below are some examples of standard caps.

What is a Hat?

Hats are often regarded as to be worn with formal attire like suits. Michael Jackson’s suit wouldn’t be the same with no hat to complete the look. Both men and women utilize hats. There are various kinds of hats depending on the brim’s size and their purpose. A number of the hat types are toddler hats, visor hats, fedora hats and cowboy hats. All these are the most popular ones.

Besides formal attires, they can also be utilized for casual attires and are often seen to be used for religious purposes. In some areas, hats are used to denote the position and positions in society.

Let us look at several common Kinds of hats:

Main Differences Between Cap And Hat

Though a hat is a kind of cap, there are some significant differences between them in terms of shape, productivity, and comfort. Let’s talk about those differences as we are discussing the difference between cap and hat.

Cap and hat are both headgear’s. Only specific kinds of caps are observed to have a brim.

Caps do not have brims. They have visors or peaks that behave as a brim. These brims are of various sizes.

Caps have a crown, but they are not shaped crown molding. Hence, the caps don’t have a distinct rigid form and fit close to one’s head. They match perfectly on all people without having to take care of the size. On the other hand, hats have a shaped top or crown. They fit differently for each individual, and you need to look at the fittings of a hat before purchasing.

Men mainly wear caps. They are worn for getting shade against the sun during summer and supplying warmth during winter. They can also be utilized as a fashion accessory with casual clothes. At the same time, men and women wear hats as a fashion accessory in addition to for spiritual purposes. They do not have a fixed purpose.

Caps and hats have been headgears worn for completing one’s style statement. Although they are mainly worn as accessories, they are also used differently for warmth and comfort. Caps will be the headgears that have no shaped crown and a brim. Even though men predominantly wear them, girls wear them also. There are different kinds of caps depending on the event it is used for. Hats are headgears with brim and shaped crown.

Colors come in sizes since the shaped crown does not necessarily match everybody. The brim of these hats also has various sizes and is utilized to obstruct the sun. Hats are used for blocking the sun, whereas caps are being used for supplying shade. Given all the information regarding the difference between cap and hat, we expect you to choose the right hat or cap as per your outfit and comfort.

How Much Do Underwater Welders Make?